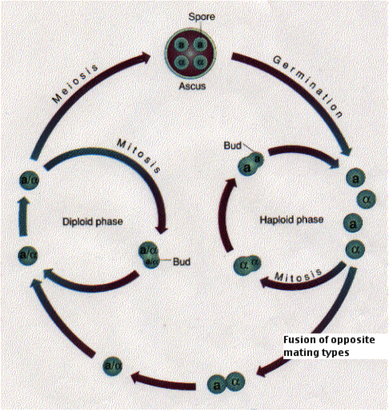 [*]
Saccharomyces cerevisiae are unicellular eukaryote budding yeasts that have cellular activities that resemble that of human cells. This is one of the main reasons why it is used as a model organism in the laboratory. Yeasts that are capable of budding can live as either having two genomes known as diploid or having one genome, haploid. Both genomes are able to reproduce by mitosis when one cell gives rise to two different cells. There are three different cell mating types of S. cerevisiae two of which are "α” and "a" representing two different haploid mating types. The third cell type is “a/α” which is a diploid cell type that cannot mate with either of the haploid cell types but can undergo meiosis. Haploid cells are able to live for long periods of time in the haploid condition except once they come in contact with a cell of the opposite mating type they fuse and enter the diploid phase of the cycle. Once a diploid cell is exposed to nutritional deprivation they undergo meiosis and produce four haploid spores wrapped in an ascus sac. Once the conditions become favorable once again the spores germinate and produce four haploid yeast cells two of which are the a type and two the a cell type.

Yeast cells are typically grown in either a liquid medium or the surface of a solid agar plate. The medium that can be used usually contains glucose, maltose or trehalose along with salts that are rich with nitrogen and phosphorus. Yeast can also use some metals such as iron, zinc or magnesium. When yeast cells are in healthy medium their cells divide once every ninety minutes during log phase. After being inoculated onto fresh medium colonies normally form between two and three days at thirty degrees celcius.