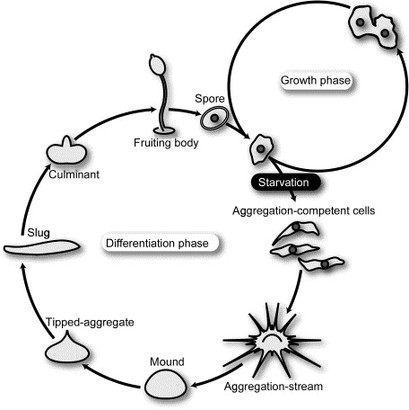 [*]
The life cycle of Dictyostelium discoideum starts once spores are released from a mature fruiting body, referred to as the sorocarp. Once the spores are germinated, myxamoebae will hatch in the presence of a warm and moist environment. The myxamoebae feed on bacteria, algae, and other protozoans using its pseudopod, and reproduce by mitosis. Once the myxamoebae runs out of food, it enters aggregation, which is a state of starvation. In this state, adenylyl creates cyclic AMP, which is secreted by the starving myxamoebae to attract other cells to a specific location. The cell myxamoebae also secrete glycoproteins. As neighboring cells are attracted to a specific location, they brush up against each other. The glycoproteins cause the cells to stick to one another. When the neighboring cells come together, they form a loose aggregation. Once enough cells join, the cell mound is called a tight aggregation, and is ready to undergo change. The mound builds upward. At some point, the mound tips over on its side, measuring between 2 and 4 millimeters. At this point, the tight aggregation has now become a slug, with hundreds of thousands of cells have cumulated, which can now move together as one unit. If the organism were to be grown on a petri dish, depending on the environment and conditions of the petri dish, the slug would be able to move around for several hours. Differentiation-inducing factor and cyclic amp cause the slug to become differentiated, with pre-stalk cells in the anterior of the slug and pre-spore cells in the posterior. Once the slug has found an environment with ideal conditions, the slug will settle. The slug forms a pre-flowering bud shaped fruiting body.

Dictyostelium discoideum were first described by Kenneth B. Rapper as a common component the soil population in a widely scattered area from many types of soil.  The first observed D. discoideum were harvested from soil and decomposed leaves of a hardwood forest in North Carolina. The primary trees of this region were beech, birch, oak, and buckeye. Cultures first arose after being mixed with 5 parts of sterile water and an agar plate, being incubated at 20*C for three weeks.