Sacchromyces cerevisiae is a round to ellipsoidal yeast with a cell diameter of 5 to 10 μm at it's longest diameter. Cell volumes for S. cerevisiae range from 25 to 55 μm cubed depending on whether it is haploid or diploid. As a simple eukaryote it shares features common to all eukaryotes, a cell wall, plasma membrane, cytosol, membrane bound nucleus, golgi apparatus and a vacuole. Along with the plasma membrane and cell wall, S. cerevisiae also have a periplasmic space which lies in between and together the 3 structures make up the cell envelope which protects the cell and controls osmotic pressure and permeability.

The cell wall of S. cerevisiae is 100-200nm thick which is deep compared to it's relative size. While it is primarily made up of glucan and mannan polysaccharides, a small amount of chitin is also present in the cell wall; chitin is a constituent common to the cell walls of many fungi (but not all yeasts) and is also main strengthening component of anthropod exoskeletons. The thick, tough cell walls of yeast can sometimes make it a challenge to "get into the cell" in the laboratory.

Another specialized feature of yeast cells like S. cerevisiae is the presence of a bud scar. A bud scar is a circular concave protrusion that develops after a mother yeast cell buds during cell division to give rise to a daughter cell. 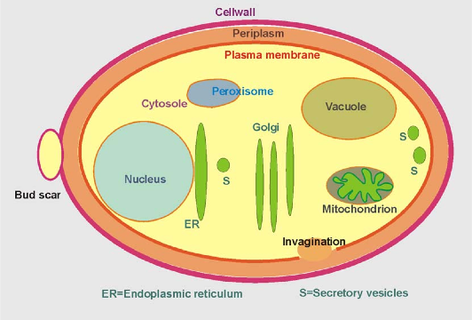